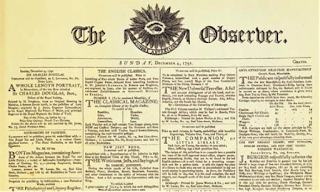 W.S. Bourne launched The Observer at the end of a century during which the British newspaper industry exploded. In the early 1700’s, most newspapers (and similarly styled pamphlets, bulletins, etc.) appeared monthly and attracted only a scant audience. By the time that The Observer was published in 1791, British printers distributed several million copies of newspapers annually.
Bourne started his paper in order to reap some of the profits of this booming industry. However, he found himself struggling to earn back his initial investments. Bourne hired a new editor in 1807 and wiped his hands clean of the business when he sold the paper in 1814. The subsequent owners and editors of The Observer expanded the paper’s readership and covered the engaging, if often turbulent, news of the modern era.
The Observer, the first Sunday paper, continues to set new precedents. The editors and owners of The Observer created a blog in 2005, becoming the first newspaper to detail their internal decisions publicly online. Nor did the firsts stop there. In the same year, The Observer became the first newspaper to release podcasts. Innovation is an integral component of the media industry, whether that means launching a Sunday paper or starting a company blog.
Posted by Unknown at 12:05 PM No comments:

This Day in European History: December 1st, 1989
The End of Communism in East Germany


On December 1, 1989, the communist regime in East Germany removed the monopoly of power from the East German constitution. Leading up to this day, East Germans had expressed much dissatisfaction with the communist regime of Eric Honecker, which was in part apparent by the mass exodus of people from East Germany. Mikhail Gorbachev, the General Secretary of the Communist Party of the Soviet Union, eventually pushed for a new government and in October of 1989, Honecker was replaced by Egon Krenz, secretary for internal security issues.

Krenz restricted travel to the West in an attempt to end the exodus. This plan back fired on Krenz, as more East Germans decided to leave because of the restriction. In November, pressure intensified as Communism in the Soviet Republic and Eastern Europe began to fall apart. As a result, the East German government had no choice but to take down the Berlin Wall. A mass migration of East Germans instantly entered West Berlin. Gorbachev consulted with the United States, France, and Britain because of his worry for Germany’s future.

The communist regime finally surrendered its monopoly of power on December 1st and the section in the East German Constitution permitting sole power of the Socialist Unity Party of Germany was removed. This constitutional revision officially ended Communist rule in East Germany. 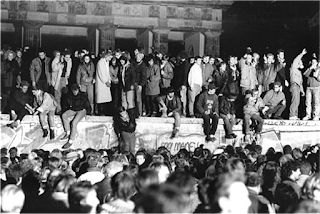 Posted by Unknown at 1:17 PM No comments:

As the social environment shifted towards more liberal ideals, a revolt in 1862 against the Greek King Otto marked the end of the constitutional monarchy for Greece. The Second National Assembly drafted a new constitution two years later that transitioned Greece from a constitutional monarchy to a crowned republic - with newly crowned George I as monarch.  It was the first Constitution of Democracy with a King as head of State. For the first time in the world, It also established the principle of universal (direct and secret) ballot and restored popular sovereignty. The people were the driving force of state power, but the King reserved the right to dissolve Parliament at his discretion as long as the Cabinet signed and endorsed the dissolution decree.

Posted by Unknown at 6:32 AM No comments:

On October 28, 1940, Greek Prime Minister, Ioannis Metaxas, firmly rejected an ultimatum from Italian Prime Minister, Benito Mussolini. The ultimatum was presented to Metaxas by the Italian ambassador, Emanuele Grazzi, to surrender in order for Italian forces to strategically occupy areas in Greece. Metaxas apparently responded by saying “Oxi!” which translates to “no” in Greek.

That same morning, Italian troops attacked the Grecian-Albanian border, which was the beginning of Greece’s involvement in World War II. This invasion became known as the Greco-Italian War and lasted until April 23, 1941, much longer than Mussolini had anticipated. The Italians faced heavy resistance and were eventually pushed back in to Albania, causing the German army to take over. This delayed Germany from entering Russia and ultimately altered the fate of the axis powers.


October 28th would later become a national holiday known as Oxi Day (pronounced O-hee), celebrating the anniversary of courage and honoring those that defended the country. Greeks all over the world recognize today by proudly waving their flag and hosting parades involving the entire Greek community. 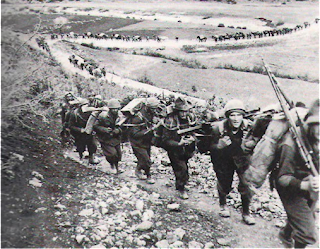 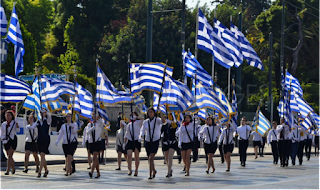 Posted by Unknown at 6:19 AM No comments:

Sigrid Hjertén, born October 27, 1885, was a Swedish modern expressionist painter. Color was a powerful aesthetic force in Hjertén’s work, as she heavily used color and shapes to express her emotions. She was inspired by color and simplified form while studying under French artist Henri-Émile-Benoît Matisse in Paris. After studying, she returned to Sweden and it was in 1912 when she first debuted her work. Matisse’s influence is evident in Hjertén’s art during the 1910s; however, her later work began to reveal intimate aspects of her life, from her husband and her son to her own personal struggles.

Hjertén expressed herself predominately through colors. During the 1920s when living in Paris, she suffered from many psychosomatic disorders and feelings of isolation that were reflected in her art by her use of darker and colder colors. In 1932, just as she was preparing to return to Stockholm, Hjertén fell ill and was admitted to a psychiatric hospital where she was diagnosed with schizophrenia. Hjertén’s later work expressed extreme emotions, from horror to euphoria and she began to create more, painting a picture every day.

By 1938, her mental illness worsened. She created less while under permanent hospitalization. In 1948 Hjertén passed away from a botched lobotomy. Hjertén’s personal and expressive use of color and shape to illustrate powerful emotions have made her one of the most influential modernist painters during the Swedish modernism movement. 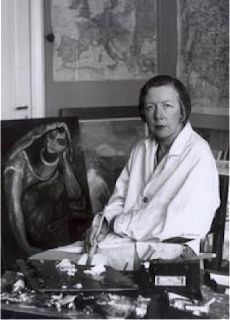 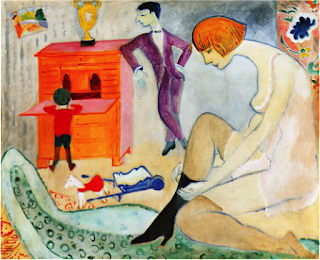 Posted by Unknown at 6:51 AM No comments:

- The Creation of the Football Association -
By Ena Barisic

Ebenezer Morley, a London solicitor, formed Barnes FC in 1862 and could thus be considered the ‘father’ of the modern English Football Association (FA). Morley wrote to Bell’s Life, a popular newspaper, arguing that football should have a set of rules in the same way that other sports, like cricket, have. His letter led to a first historic meeting at the Freemasons' Tavern in Great Queen Street, regarding the establishment of The Association.

The Football Association was formed at the Freemason’s Tavern on October 26th, 1863. Captains, secretaries and other representatives of other London and suburban clubs playing their own versions of football met “for the purpose of forming an Association with the object of establishing a definite code of rules for the regulation of the game”.

A new FA National Football Center was recently opened in St. George’s Park in 2012. It is now, a leading center of sports medicine and science, the center for coach education and a training home for Club England and its 24 representative sides. 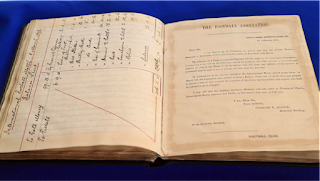 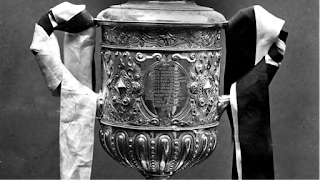 Posted by Unknown at 6:41 AM No comments:

STEMANITIES
A Consideration of the STEM Fields and the Humanities
by Thomas Reilly
As an Honors Ambassador, I work with sixty-four incredibly accomplished students in order to represent the Honors Program. From my time giving tours and speaking with many high school and first year students, I have noticed a pattern whenever I ask them what they would like to study. It seems that I receive one of two answers: either they cautiously stutter their intentions, or they give their answers with confidence, sometimes even with arrogance. These students almost always intend to major in a STEM field, and their confidence reflects society’s prominent emphasis of technical training over the social sciences and the humanities. This phenomenon proves all the more salient at the University of Florida where the Shands medical complex is steps away from classrooms and where more than $323 million dollars of the university’s $619 million research awards are health-related. The humanities intertwine with the sciences more than many realize, and while the division between them is understandable, there are resources to reconcile it.
Scheduling often bars STEM students from humanities courses. Admittedly, one look at the regimented critical tracking requirements for a chemical engineer confirms that time often does not permit supplementary coursework. Although some majors, like Chemistry or Mathematics, in the College of Liberal Arts and Sciences also encounter this problem, CLAS is generally more flexible even when a preprofessional track is thrown into the mix. Haley Oberhofer is a third-year chemistry and anthropology dual major on the premedical track, a diverse combination that she explains in the following way: “I hope to become a craniofacial surgeon and to work in developing countries.  Biomedical and cultural anthropology will be extremely pertinent in my future profession. In order to treat patients, we have to know and understand their backgrounds.” In Haley’s case, a humanistic foundation is at least as practical as taking additional STEM courses, which hopefully expels the notion that disciplines like anthropology are a leisurely indulgence that students cannot afford.
In fact, the entire idea of humanity is inextricable from the STEM fields. Matt Salis is a fourth-year mechanical engineering major involved with UF’s Design Build Fly team, which creates radio-controlled aircrafts for competition. When asked if he felt his coursework to be gratifying, he reflected, “My relationship with my classes is that I don’t hate them. I find fulfillment within the actual application of engineering principles; I have found most of this fulfillment within the design team I work on. For me there is a huge difference in terms of fulfillment between solving practice problems in the classroom and performing the analysis, design work, and manufacturing of an aircraft. This difference lies mostly in the creative element within design engineering.” The difference between a physics class and an art history class thus seems to be that one applies what the other seeks to understand, i.e. being human. Without the desire to improve the human condition much of the world’s scientific advancement would never have come into being, therefore begging the question: how effectively can you help that which you do not understand?
For many STEM students, the Center for European Studies has the potential to ease this imbalance. The Center was the first in the nation to receive funding from the European Union in order to establish its Jean Monnet Center of Excellence, through which it hosts guest lectures and workshops - opportunities that require little time investment from a busy physics major. Additionally, many companies and firms collaborate with their European counterparts and therefore value employees who can make connections with English engineers or Russian researchers. For students whose professional goals would benefit from becoming bilingual, not only does Center offer classes in less common (and therefore more marketable) languages such as Hungarian and Turkish but it also distributes Foreign Language and Area Studies (FLAS) fellowships, which provide funds for students in all subjects to study European languages.
The separation of knowledge into discrete domains, as universities must unavoidably implement, is illusory. Descartes, for example, married philosophy and mathematics in his influential legacy, while Wittgenstein studied mechanical engineering and aeronautics before contributing to our understanding of language. In the same way, students today must recognize the importance of the humanities and their relationship to the sciences – a relationship not of discord but of harmony.